Sportsnet: Elliotte Friedman and Jeff Marek on 32 Thoughts: The Podcast – Out of gas, but not ideas, talk about the latest Erik Karlsson trade rumors.

Marek: “To start things off. This started off with a conversation on a radio show earlier on this week, was our discussion on the San Jose Sharks and Erik Karlsson. And I asked you early in the morning if there was anything between San Jose and the Ottawa Senators. Vis-a-vie, Erik Karlsson, and you said, ‘give me some time, I’ll get back you.’ And then on the radio show you said, ‘there has been discussion between the two sides on Erik Karlsson, and then, boom, new cycle begins.

What is the latest, if there is indeed, a latest on this issue?”

Friedman: “I don’t think there is anything hugely new as we do this at this time. Mike Grier set a lot of this in motion when at the GM meetings he said that yes, it was something that he would consider.

I think there are teams that have kind of talked, and I think the Senators are one. Number one, I should say, I don’t think anyone’s gone to Karlsson yet to say, ‘would you waive for here?’ I don’t think we’re at that point or anywhere near close to that.

It’s such a complicated deal, and I think one of the things that makes it very complicated is that, how many teams have the ability to really do this? And Ottawa with a lot of their contractual obligations from players who you’re not going to want to trade. Like, I don’t think they can do it, and I think that’s kind of where it went there.

Marek: “This one, if it indeed does happen at any point to whichever team, this one has third team screaming at me.”

Marek: “When you consider salary retention because even if the San Jose Sharks take a major chomp out of the contract, you’re still going to probably need a third team here now. Not unlike, I remember you and I talking, actually when we were in Paris, about Patrick Kane and how if they were going to move him before the season there would have to be a third team involved most likely. I kind of get the same feeling here with Erik Karlsson. Mainly because, not only because it’s $11.5 but it’s four more seasons Elliotte.”

Friedman: “But that’s the problem. I think that Patrick Kane or Jonathan Toews is an easier one to do, third team retention because it’s short-term.

Let’s just say for augment’s sake. Arizona could do it. At some point in time, Arizona is going to have to start paying some of these young guys it’s got. And who knows? We don’t all know where we’re going to be in four years. You look at all the trending topics on twitter tonight and there’s a world full of people expecting to wake up and not see twitter tomorrow. So I mean, who knows what’s going to happen out there?

How many teams are going to be willing to say, ‘we’re going to be interested in retaining for four years. That is a really tough ask. Even for a team that is rebuilding right now. Arizona at some point in time, they’re going to have to start trying to win and paying their guys. That’s a big, big commitment, Jeff, and I’m not convinced there are teams out there that are going to want to do that.”

Friedman: “Florida is a really skilled offensive team. they’ve got a lot of money coming off their cap after this year. They’re going to have bit more flexibility. He fits with them. The other one, and again, this is purely my opinion. How many defensemen does Washington have signed after this year?”

Marek: “John Carlson. One. Well they have two RFAs but they have Matt Irwin a UFA. Erik Gustavsson’s a UFA. Trevor van Riemsdyk and Nick Jensen are UFAs as well.”

Friedman: “and so is Orlov.”

And again, this not me digging on it. This is me looking at it and saying, see situations where those two teams are players here. But again, Karlsson’s going to want to go and there’s got to be a willingness to work out a deal. But, those are the ones that kind of stick in my head to watch.

I’m sure there’s going to be more twists and turns as this goes.”

Marek: “The one thing I wonder about with the Washington Capitals is, and we talked about this on radio the other day, the Washington Capitals are going to do whatever it takes to get Ovechkin that record. To catch Gretzky and beat Gretzky. I know John Carlson is already there as a right-hand shot. Do you want another right-hand shot Karlsson, in an Eriksson, to ensure someone’s getting the puck to Ovechkin?

There’s not going to be any rebuild here for the Caps as long as Ovechkin’s chasing this record. There just going to keep putting in players to give him the best possible chance to get it.”

Friedman: “I don’t disagree with you. The one thing there is, the Karlsson-Burns thing didn’t work in San Jose and now you’re looking at it with Burns in Carolina, Karlsson’s red hot in San Jose. So maybe he might not want that.

Again, don’t anybody run with that we’re reporting this. This is two of us spitting here. Like give us a break. Don’t radio us on the first day on Mastedon or whatever the hell we’re going to.”

Marek: “Oh, is that where we going Friday morning? Okay, good.”

Friedman: “Anyway, Florida’s number one. That one jump right into my head, and Washington is another, simply because they got no defensemen for next year yet.”

NHL Rumors: The Vancovuer Canucks, Bo Horvat and his agent all in Toronto, but…. 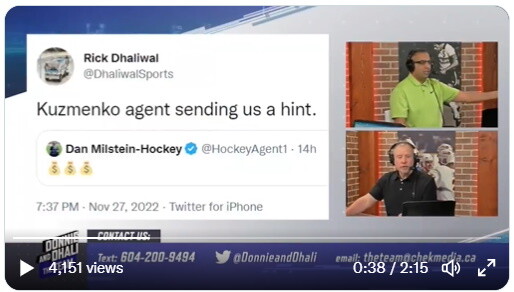